Sonos speakers have long been the benchmark for ease of use and sound quality in multi-room audio. But for almost as long, the company has refused, point-blank, to follow the rest of the industry in producing a mobile, battery-powered speaker with Bluetooth. With the new Sonos Move, however, it has finally relented.

At last, Sonos fans can buy a speaker that can be picked up and moved around the house or taken out into the garden without the need for a mains extension lead. And, in doing so, Sonos has also produced the most advanced, best-sounding wireless speaker in its category. If you're looking for a mobile smart speaker and don't want to compromise on sound quality, this is absolutely the one you should buy. 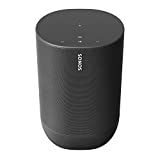 READ NEXT: The best smart speakers you can buy

Sonos Move review: What you need to know

If you were hoping for a Sonos speaker to pop in your suitcase and travel the world with, however, you’re going to be disappointed. The Sonos Move is far too big and heavy for that, weighing a not-inconsiderable 3kg and measuring 240mm tall. It’s better suited as a mobile, housebound speaker for use in the garden, or for providing a backing track to occasional picnics at the park.

It does, however, include all the features we’ve come to expect from Sonos in recent times. There’s support for both Amazon Alexa and Google Assistant (although not both simultaneously), Wi-Fi and Apple Airplay 2, full integration with the Sonos ecosystem and the ability to tune the speaker to its surroundings via Sonos’ TruePlay technology.

At £399, the Sonos Move is quite the investment and although it is possible to buy it for less than the RRP - around £380 from Amazon - that places it firmly at the premium end of the smart speaker market. It's pricier than the now-reduced Google Home Max (£299) and even the Apple HomePod, which costs £199 . It’s pricier than an Amazon Echo Studio (£190) and it also costs more than a stereo pair of Sonos One speakers. None of these rivals are particularly portable, however, and they lack the built-in battery of the Sonos Move. 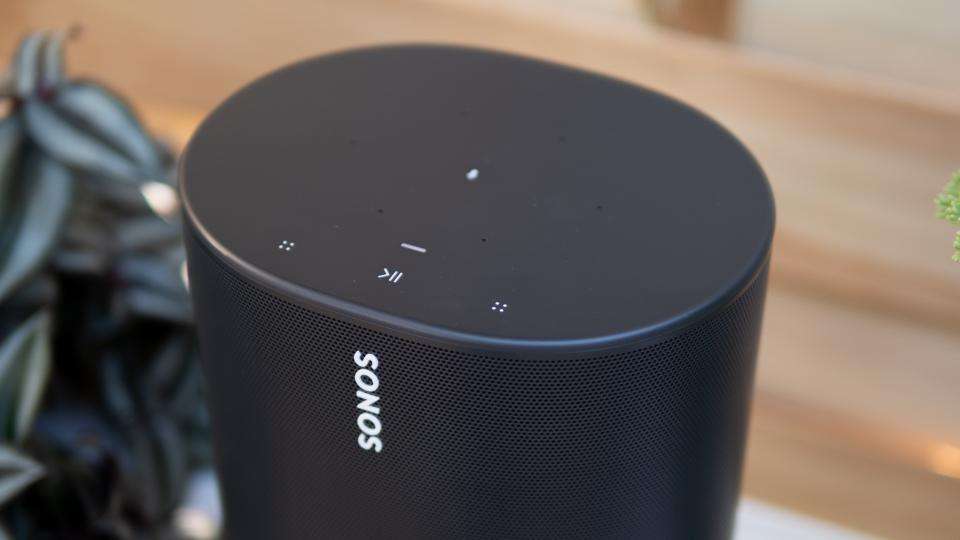 Perhaps the closest speaker in form and function to the Sonos Move is the exceptional Libratone Zipp 2. This speaker supports Wi-Fi and Bluetooth, AirPlay 2 and Spotify Connect and also comes with Alexa support. It can’t count Google Assistant support among its many features but the Zipp 2 is a good deal less expensive than the Sonos Move at £219 and does sound rather good.

Aside from the new connectivity and portability, the Move moves away from the bulk-buy, baked-bean tin look of previous models. Available only in “Shadow Black”, the new speaker is taller with an oval top plate and a profile that tapers at the bottom end for a more elegant look. It’s not a particularly radical design but it is a good deal more attractive than the squat Sonos One .

As you’d expect, all the main controls sit on the top panel, which also plays host to the speaker’s far-field microphone array. The controls are touch-sensitive, of which I’m not normally a fan, but these work reliably and quickly; they comprise a microphone on/off button, a play/pause button and a pair of controls flanking that for adjusting the volume up and down.

The rear of the speaker is dominated by a large, scooped-out hollow that doubles as a carrying handle, which you definitely need given how heavy the thing is. Within this you’ll find the power button, the join button for connecting the speaker to Wi-Fi or an existing network of Sonos speakers and another button for switching the speaker between Bluetooth and Wi-Fi. 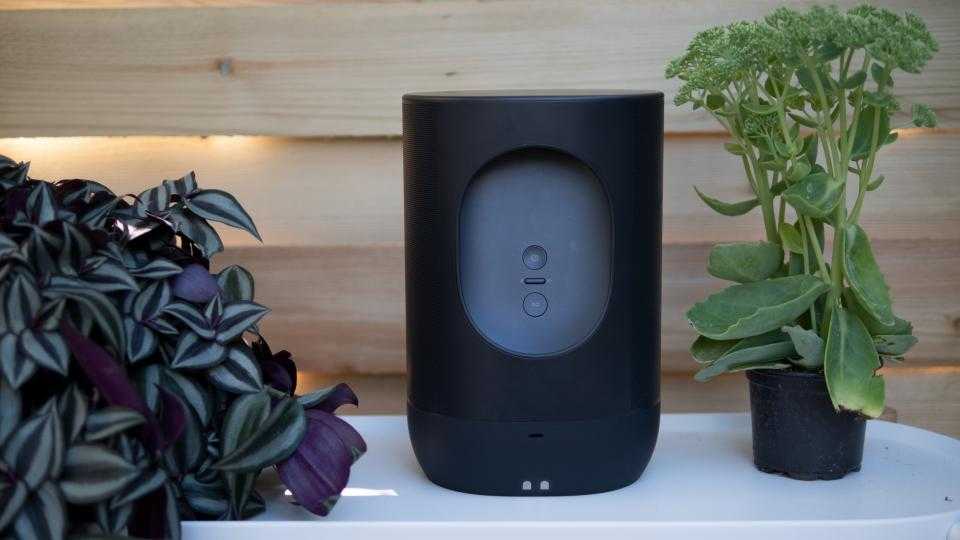 Unlike Amazon’s Echo speakers, you can’t simply ask the speaker to “connect to my phone” – that’s a feature the retail giant reserves for its own products – but it does connect quickly when you press the button and pairing is simple. Just hold the pairing button down until the LED on the top of the speaker flashes blue then select the Move in your phone’s Bluetooth pairing menu. To charge the Move simply drop it into the ring-shaped charging base supplied in the box or plug it in via USB-C.

The Move feels exceedingly solid and well made, though, and – Sonos promises – it’s drop resistant as well as weatherproof. Indeed, it even has an IP56 rating for dust- and water-resistance. That doesn’t mean you can drop it in the pool but it should shrug off a rain shower or two if you’re caught out or forget to bring it in from the garden.

Another big thumbs-up goes to Sonos for making the battery in the Sonos Move user-replaceable. It’s a 2,500mAh unit that fits into the base of the speaker and lasts around ten hours per charge. There’s no price available for replacements yet but Sonos is quoting a life of around three years and since Sonos supplies all the required tools with any replacement battery it’s an easy job – simply peel off the rubber strip on the base, undo two screws, pry the battery out of its compartment and replace with the new one.

The only criticism I have is that the speaker is so big and bulky. I’d love to make this my go-to travel speaker but as it stands its 3kg heft means I’d only be able to consider taking this with me if I were driving to my holiday destination. It’s the perfect speaker for a beach holiday in Cleethorpes, just not a camping trip to California.

Elsewhere, the Sonos Move is equipped with the same features we’ve come to love in the Sonos One: support for both Amazon Alexa and Google Assistant; a fantastically easy-to-use app with fully integrated support for Spotify, Tidal, Qobuz and more than 100 other streaming services; and the ability to pair two Sonos Moves together to produce stereo sound.

It’s worth noting, though, that you can’t use both Alexa and Google Assistant interchangeably, which is a shame. Instead, you have to switch between them in the app. And, in keeping with other third-party smart speaker manufacturers, the Move can’t make use of some key Alexa features, such as the useful Drop-in and phone call features.

That’s mildly frustrating but, the Move has benefits that Echo and Google Nest speakers don’t have, the main one being the ease with which you can network it with other Sonos multiroom speakers. If you already own a network of Sonos speakers – perhaps a Sonos One in the kitchen and bedroom and a Sonos Beam in the living room – just press the join button on one of your already connected Sonos speakers, then the join button on the Move and they’re all linked together.

At this point, you’ll be able to play music through all the speakers at once or send different music to individual speakers, and control the volume universally or individually as you see fit. It’s the easiest to use multiroom and streaming music app there is.

Perhaps the most exciting feature of the Sonos Move, however, is one borrowed from the Apple Homepod: Auto Trueplay. Trueplay tunes the speaker’s frequency response to suit the room you’re listening in and, previously, this was a manual process – and quite a tedious one at that.

You had to fire up the process from the Sonos app on your (iOS-only) smartphone and then wander slowly around your room waving your phone up and down while the speaker emitted a series of test tones. The microphones on your smartphone would pick up the tones, then the app would tweak the speaker’s EQ accordingly. The result? Far cleaner, tighter bass and better overall sound quality.

The Sonos Move takes care of this process entirely automatically, just like the Apple HomePod. It uses motion sensors to detect when it’s been picked up and put down again and, instead of relying on the microphone in your phone and test tones to measure your room’s frequency response, it uses clever technology to compare what the microphones pick up with the original audio signal to work out how your room might be adversely affecting what you hear.

The process works seamlessly – it takes around 30 seconds to kick in – and you can really hear the difference when it does. One thing to note, however, is that the feature doesn’t work when you’re in Bluetooth mode; instead the speaker switches into its default sound profile.

There’s nothing particularly fancy about the driver arrangement inside the Sonos Move. A single, downwards firing tweeter sits at the top of the speaker, which sends high-frequency audio down, against a “waveguide” that then disperses the sound outwards and upwards. For the mid and bass tones, meanwhile, there’s a larger, forward-facing mid-woofer. These two are coupled with a pair of class D digital amplifiers.

The speaker’s output is impressive. There’s plenty of volume, enough to fill a large studio apartment-style space, plenty of bass and bags of control and clarity. I’ve listened to the speaker outdoors and indoors, next to walls and on the floor, placed on shelves and in corners and the Sonos Move consistently punches out audio in a controlled, considered and detailed manner. Just like you’d expect a Sonos speaker to sound, in other words.

In fact, I’d go so far as to posit that this is the best sounding smart speaker on the market right now. It’s better sounding than the Apple AirPod and given that it supports Google Assistant and Alexa, much smarter too. It’s more muscular sounding than Sonos One and streets ahead of the best Amazon and Google-branded smart speakers or screens.

In short, I love this speaker. I was initially surprised at how big and heavy it was and, at 3kg and nigh on a foot tall, it isn’t a speaker you’re going to want to sling your backpack. But if you want great sound quality you have to accept some compromises.

Moreover, this is a speaker that fills in all the gaps in Sonos’ multi-room family. It has battery power so you can move around with you. It has auto-room tuning like the Apple Homepod so you don’t need to faff around with manual tuning to make it sound its best. It supports both Alexa and Google Assistant and even comes with Bluetooth connectivity.

What Sonos has built here is the most complete, best-sounding smart speaker on the market. It might be pricey but it’s well worth the money – the Sonos Move is simply brilliant.