In a quiet, tree-lined street in a suburb of Paris, a gap in the hedge reveals the two pillars of a concrete gate and, beyond that, a shady drive. What you would never know is that at the end of this drive is one of the most significant houses of the 1920s. Even more intriguing, its designer was not French but Italian, and while he would go on to become world famous, this very private home is hardly known even among aficionados of his work.

Gio Ponti was arguably the greatest and most influential Italian architect and designer of the 20th century. His best-known work dates from the 1950s and 1960s: the supremely elegant Pirelli Tower in Milan, the ethereal Superleggera chair, and the effervescent Parco dei Principi hotel in Sorrento.

Yet he began his career in the early 1920s as the artistic director of Richard Ginori, the historic Italian porcelain company, where he brought a playfulness and lightness of touch to its previously stodgy output and transformed its fortunes almost overnight. 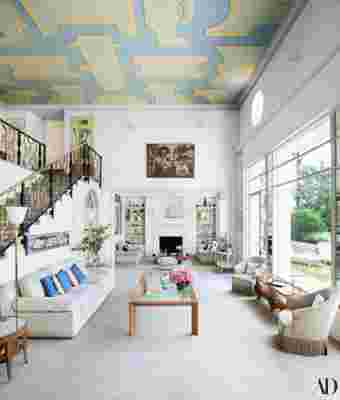 Ponti painted the ceiling of the villa’s central hall with a Palladian-inspired motif.

Though his talents encompassed fine art, furniture, ceramics, textiles, and interior decoration, not to mention launching and editing the legendary design magazine Domus, Ponti actually trained as an architect in Milan. He designed his first house there for himself, but how he came to build his second outside the French capitalis a fascinating story. It all hinges on the Paris Exposition Internationale des Arts Décoratifs et Industriels Modernes of 1925, which gave its name to a whole new movement in the arts: Art Deco. Ponti attended the fair to present his new collection for Richard Ginori and while there met a man who was to become a lifelong friend, patron, and collaborator.

Tony Bouilhet was just 28 in 1925, but he was already making his mark on Christofle, the French silver company owned by his family since the 1830s. When he met the 35-year-old Ponti at the fair, according to his granddaughter Sophie Bouilhet Dumas, “it was almost like love at first sight.

In his diaries my grandfather wrote that, for him, meeting Gio Ponti was like meeting the young Leonardo da Vinci—here was a man who could create anything.”

Perhaps this intense first feeling explains why Bouilhet commissioned Ponti to design a weekend retreat on a plot of land he’d bought in a fashionable suburb of Paris. When they first met, Bouilhet was a single man-about-town whose friends included everyone from Man Ray to Jean Cocteau. But his friendship with Ponti transformed his life twice over when he met Ponti’s niece Carla Borletti. They married in 1928, and they shared the house for the remainder of their lives.

At this early stage in his career, Ponti was working in a neoclassical style, inspired by the Palladian villas he had visited during his service as a captain in the Pontonier Corps during World War I. But the Bouilhet villa (still used by the family today) is no historicist pastiche, and its Palladian influences are worn so lightly that, like the painted ceiling in the central hall, they almost float away. This glamorous double-height hall, with its transverse stairs, forms the center of the house, which in its original form was a perfect encapsulation of 1920s living. Upstairs, the hall separated the parents’ from the children’s quarters, while on the ground floor, morning and evening rooms were arrayed on either side. Adjacent to the garage was a nymphaeum, sadly since lost. 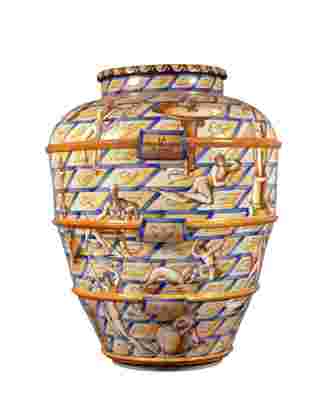 Though interrupted by World War II, Ponti’s friendship with the Bouilhets lasted until his death in 1979. He also created many superb designs for Christofle, which can be seen around the house, starting with the Dolphin and Arrow collections of the 1920s and continuing to the late 1950s.

Many of them will go on public view this October in a major Ponti retrospective, cocurated by Bouilhet Dumas, at the Musée des Arts Décoratifs, which was cofounded by her great-great-grandfather. (Its current president is Pierre-Alexis Dumas, artistic director of Hermès and, by happy coincidence, her husband.) The show also includes perhaps the most personal and touching object at the house. Over the fireplace is a glazed ceramic pot from Ponti’s 1925 collection for Richard Ginori, though this one was specially produced three years later. Among its neoclassical motifs you can find a tiny drawing of the villa Bouilhet and, below it, Ponti’s hand-painted dedication, “A Carla e Tony da Gio Ponti, dedicato 8-IX-1928.”