Internet radios with media streaming have been around for ages, but most of them still have primitive-looking mono LCD screens and clunky interfaces. Logitech has been ahead of the game for a long time thanks to its Squeezebox audio streamers, which have colour screens and easy-to-use controls. The UE Smart Radio is part of Logitech's Ultimate Ears audio range, but it's based on the design and interface of the Squeezebox Radio. You can even update existing Squeezebox Radios to the Smart Radio interface. 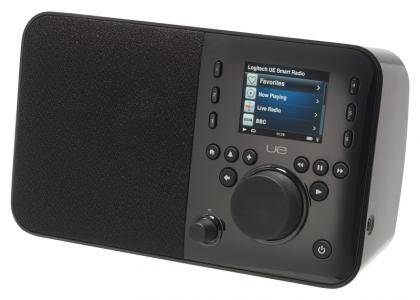 The Radio is neatly designed: a curved black box with a recess on the back that you can use to carry it around. It wouldn't look out of place on a bedside table or kitchen counter, and a rechargeable battery with a quoted six-hour life means that you can take it with you if you want to sit outside or listen to Radio 4 in the bath. Beware damp fingers, though, because it isn’t water-resistant.

The front of the Smart Radio is dominated by a fabric-covered grille that conceals a mono speaker unit with both a woofer and a tweeter. To the right of the speaker are the Radio's 2.4in colour LCD screen and its control panel. Unlike many modern audio devices, there are no touch controls here, nor would they be particularly practical on a display of this size. If you require touch controls, an app is available for Android and iOS devices. The app also takes the place of a remote control, which the Smart Radio lacks.

If you prefer hands-on access to your music, you'll be pleased with the satisfyingly chunky knob below the screen. You can use it to scroll through menus, internet radio stations and song lists. There's a shortcut button for the Radio's easy-to-use alarm settings, too, and you can access extra options for individual tracks and stations, such as the ability to add them to your favourites list. At the side of the screen are six programmable buttons, and you can save any radio station to a button.

When you first set up the Radio, it starts with just the TuneIn radio app installed. However, adding new services is fantastically easy thanks to a simple web interface. All you have to do is create an account and enter a code generated by the radio to associate it. Then you can select apps, such as Spotify (which only works if you have a Premium account), Last.fm, Napster, Shoutcast, BBC radio and the fantastic Live Music Archive. There's even a free service (MP3Tunes Music Locker) that lets you upload your music to the internet and stream it to your Smart Radio. 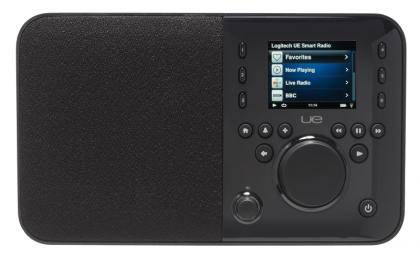 The Smart Radio website also gives you access to a downloadable media streaming application for Windows and Mac OS X computers. This lets you stream audio files to your Smart Radio in formats such as MP3, AAC and FLAC via a UPnP stream. The UE streaming application worked instantly and didn't involve fiddling with any of Windows' sharing settings. 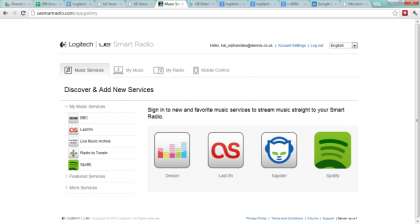 A control app for iOS and Android devices lets you control playback and browse through your services and locally shared music with ease. However, we were slightly disappointed that it didn't let us stream music from our phone to the Radio. It lets you see your favourites list, what's currently playing and it provides access to your services and streams. Navigating and searching for music is much easier to do using your phone or tablet's onscreen keyboard. However, we'd have liked more features and more natural-feeling controls, such as back button functionality that takes you to the previous screen of the app, rather than to your phone's home screen. The Smart Radio responded to smartphone commands quickly.

Audio quality isn't going to rival serious hi-fi equipment. This is, after all, a mono radio for your bedroom or sitting room table, despite the Ultimate Ears (UE) branding. Although there’s a woofer to give the Smart Radio a bit more oomph than many of its rivals, the sound still isn't either the meatiest or the most detailed around and is slightly prone to bass distortion at full volume. However, the radio can put out a surprising amount of volume for its size and provided clean and balanced reproduction of everything from news reports to harpsichord concertos and dubstep.

Although it's a relatively cheap piece of kit, the Smart Radio has features that can be compared with much more expensive audio hardware. You can link the Radio with other compatible Logitech UE hardware so they play simultaneously under the control of a single unit or remote. It's not as sleek as Sonos's expensive and feature-packed audio devices, nor can the Smart Radio's single speaker compare to the audio quality of some of Sonos's hardware, but it's a great budget alternative. The Radio also has a sleep timer, 3.5mm auxilliary input, a 10/100 Ethernet port and 802.11g WiFi. Sadly, it doesn’t have an audio output to connect a bigger set of speakers.

We're massively impressed by the Smart Radio, but our tests weren't entirely without issues. An occasional bug meant that when we switched from one service, such as BBC Radio, to another, such as Spotify, the Smart Radio sometimes buffered the audio indefinitely, forcing us to turn it off then back on again. We hope that this glitch, rare though it is, will be remedied in future firmware updates. We'd also like to see the addition of DLNA streaming directly from a mobile device via the app. However, these are minor problems with a brilliant audio streamer. If you don't want to spend a fortune on streaming hardware, the Smart Radio is the way to go. It wins our Budget Buy award.