As TVs become ever slimmer, soundbars attempt to pack movie-quality sound into ever-more slender, unobtrusive designs. That said, the LG GX soundbar has one of the tougher design briefs: it’s been specifically built to match the company’s stunningly slim GX OLED TV. Since the GX OLED is purpose-built for wall-mounting, so too is the GX Soundbar, squeezing Dolby Atmos and DTS:X support into a casing measuring a mere 33mm deep.

LG GX soundbar: What do you get for the money?

While other similarly-priced soundbars pack in numerous side-firing, upwards-firing and satellite speakers for the ultimate in sound immersion, the GX is a mere 3.1 soundbar. This means it has to downmix surround sound formats to feed its left, centre and right channels, while the .1 is taken care of by a wireless subwoofer. You can upgrade it with the LG SP8-KS Rear Speaker Kit ( around £150 ), though. 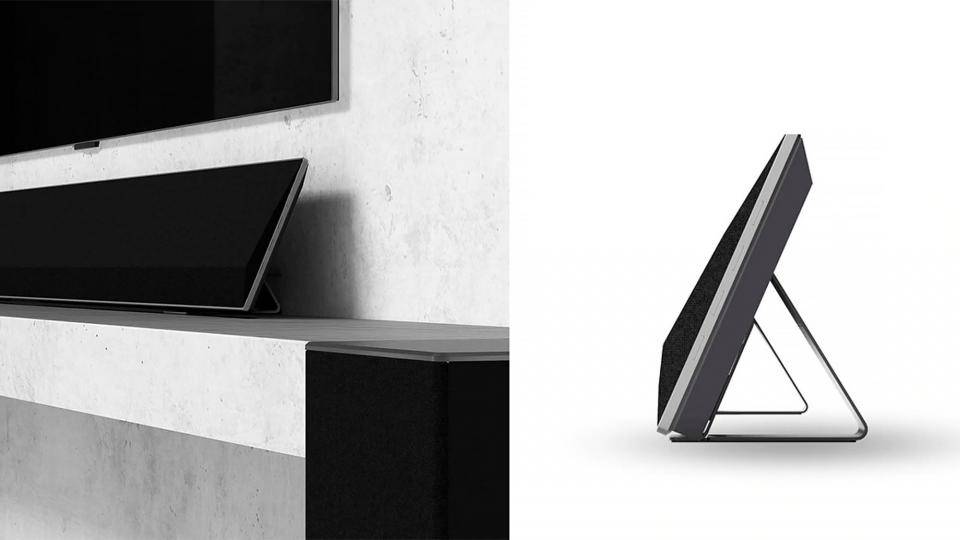 Just like its OLED TV namesake, the tall, slender GX Soundbar is designed to be wall-mounted. The wall brackets are included in the box, although you’ll need to buy the correct bolts and/or wall plugs to attach them to your wall separately. It is a tad disappointing that the soundbar needs a laptop-style power supply; an internal supply would make the process of wall-mounting and cabling a little easier.

Metal feet are also supplied in the box for those who really want to place the GX on AV furniture, but we wouldn’t necessarily recommend it. The GX’s 144cm width and widely-placed feet require a wide AV rack to accommodate them and, even though the feet lean it back slightly, placing the 15cm tall GX in front of a TV is likely to obscure the picture with most modern stand-mounted TVs. It’s significantly wider than 55in sets, too, so it’s the best visual match with 65in sets and bigger. The final moan is that the feet only slot loosely into place, so they’re not the most robust option, particularly if you have pets or rowdy toddlers careering around your home.

LG GX soundbar: How well connected is it and how easy is it to set up?

Peek at the rear of the soundbar and you’ll find two HDMI ports – one input and one eARC-compatible output – as well as an optical digital input. There’s also a USB input on the bar’s right-hand side, along with a few buttons for manually turning the soundbar on, selecting the source and adjusting the volume. The GX also has Bluetooth connectivity for wireless streaming duties.

Meanwhile, the wireless subwoofer connects automatically via 5GHz Wi-Fi, and connects to the mains with a figure-of-eight power lead. If you have any problems with wireless connectivity, a pairing button on the rear lets you manually reconnect the subwoofer to the soundbar. 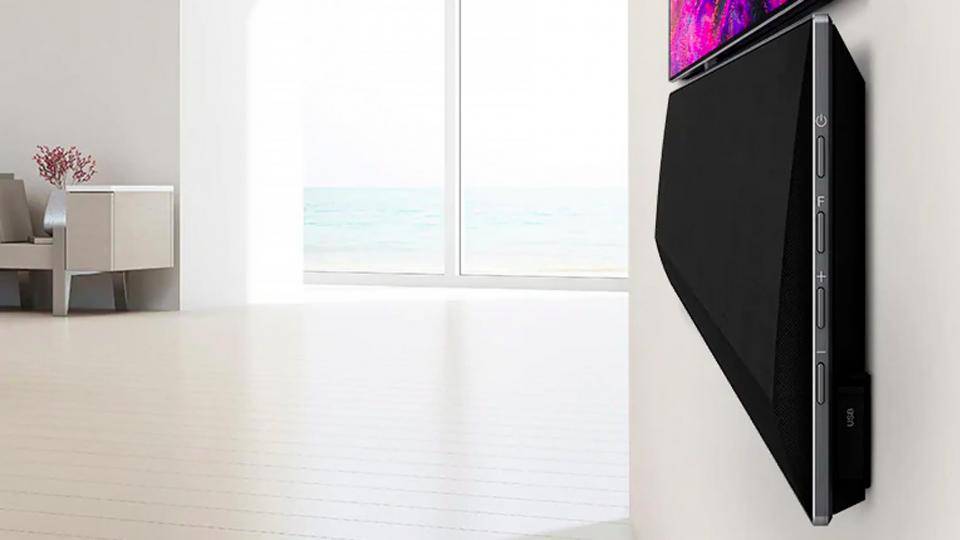 Connect the GX to a TV’s eARC HDMI output, and it works beautifully. An LED display in the centre of the bar beams into life behind the fabric grille and indicates the current volume or sound mode. It’s a shame you can’t disable or dim the display, though, as it can be a little distracting late at night, particularly when watching darker scenes.

While the GX is connected to a TV via eARC, you barely need to touch its own remote at all: it automatically powers on and off when you power on the TV, and the TV remote also controls volume and muting.

The small, dedicated remote control does provide some other options, however. It lets you select the sound profile presets, toggles upmixing, and adjust the volume levels of the subwoofer, left, right and centre channels, in addition to the surround channels if you have the optional Rear Speaker Kit connected. You can also disable Bluetooth pairing, if you’d rather not allow new connections.

LG GX soundbar: How does it sound?

There are five preset sound modes – AI Sound Pro, Bass Blast, Standard, Movie and Music – but I preferred the very similar-sounding Standard and Music presets for most of the testing. The Movie preset sounds a lot louder than the other presets, and I suspect this is because it raises the volume of the centre channel to make sure dialogue punches through clearly at all times. The only exception to this is with Dolby Atmos or DTS:X audio streams, where it’s not possible to select a sound preset.

If you’re expecting a huge, all-enveloping sound then you might want to recalibrate your expectations: the GX Soundbar couldn’t have sounded more different to my usual Q Acoustics 5.1 setup. It’s not that it doesn’t sound good – it’s actually surprisingly capable – but the lack of surround, height, and side-firing speakers means audio remains tied to the soundbar rather than spreading around the room. 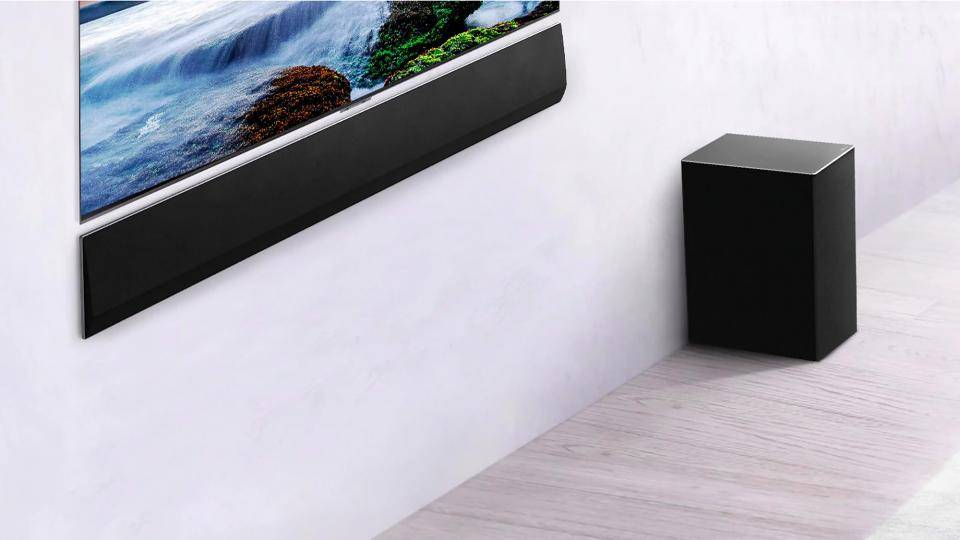 Once you acclimatise to the relatively narrow soundfield, however, the GX Soundbar does quite a lot right. There’s enough detail in the midrange and high frequencies to keep dialogue intelligible even at high volume levels, and that’s balanced with enough low midrange and upper bass impact to tackle the shake, rattle and roll of action movies. There’s perhaps a little too much mid-bass, and voices can sound a tad too small on occasion, but the balance is well-judged by soundbar standards.

What there isn’t, however, is any really deep bass. The 6-inch driver in the subwoofer does its best, but struggles to produce anything much below 50Hz, with distortion levels rising dramatically as the frequency drops lower. This isn’t surprising given how small and lightweight the subwoofer is, but the room-shuddering, chest-compressing rumble of many movie soundtracks is entirely absent.

Music sounds good, however. Vocals are crisp and clear, bass delves as deep as the subwoofer physically can, and the soundbar does a rather good job of creating an illusion of front to back depth, with layers of sounds and instruments stretching out behind. It’s really very listenable, and remains so until the volume gets too high.

Talking of which, the GX does do a pretty good job of getting loud, but it has its limits. It starts to get out of its depth once you really crank the volume, with all-out action scenes sounding compressed and strained once you push it too far. Dial the volume back a bit, however, and the GX certainly does go loud enough to add an impressive sense of scale to on-screen action.

LG GX soundbar: Should I buy it?

If you’re shopping for a soundbar to plonk in front of your TV, then we wouldn’t pick the GX. If, however, you’re shopping for one which is perfect for wall-mounting, then the GX is a good bet. The slim, tall design keeps the GX soundbar close to the wall, and while the 3.1 speaker arrangement doesn’t provide the immersion of rivals such as the superb Sonos Arc ( £799 – read our full review here ), it is a very capable soundbar in its own right. 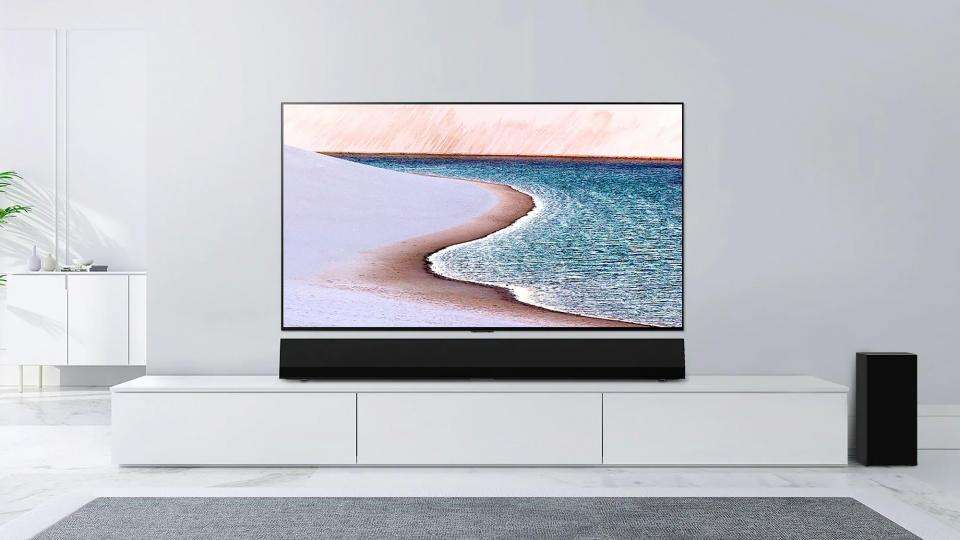