To say we were excited about the arrival of the LG CX would be an understatement. As the successor to our favourite OLED TV of 2019, the LG C9 , the CX has an awful lot to prove. It would be fun to build the tension before revealing our verdict, but you’ve already seen the five-star rating, so we’ll cut to the chase: the LG CX lives up to our every expectation, and then some.

Building on all the strengths of its predecessor, the LG CX is one of the finest 4K HDR TVs you can buy in 2020, whether you’re a film obsessive or a gamer. It’s also less expensive than the LG C9. Based on what we’ve seen of the competition, it ought to be the best-selling OLED model of the year.

READ NEXT: The best 4K HDR TVs you can buy 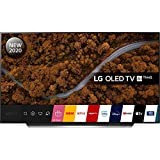 LG CX OLED review: What you need to know

LG has introduced a new 48in model to the range, which makes it even more accessible for buyers on a budget, but you can still opt for the larger 55in, 65in and 77in sizes if funds allow. For this review, LG has sent us the 55in LG OLED55CX.

In the UK, there are two key variants of the LG CX, the CX6LA and CX5LB. The former is exclusive to Currys PC World ; all other retailers will sell the latter. The differences are purely cosmetic, as the CX5LB has a silver stand while the CX6LA is finished in dark grey. Panel specifications and picture quality will be identical, no matter where you buy the CX.

The CX runs LG’s WebOS and supports every HDR10, Dolby Vision and HLG – although not HDR10+. Sadly, while most of the major content streaming platforms are present and correct, most of the Freeview Play apps such as ITVHub, All4 and My5 have yet to appear.

Sony has come in strong with its OLED models this year too, offering its 55in A8 OLED for £1,799 – exactly the same as our LG CX 55in. The Japanese firm has also announced a smaller 48in model of last year’s flagship, the Master Series A9 OLED. You can pre-order it now for £1,799 . 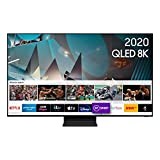 In the premium market, OLEDs tend to dominate the scene, but don’t discount the top-end LCD LED-lit models from the likes of Samsung. LG’s fellow South Korean rival has a plethora of new QLED models for 2020, including the flagship 8K QLED Q800T , which begins at £3,999 . For bright room performance, LCD models still have a significant advantage.

The LG CX’s design remains unchanged from last year’s C9. It’s a luxurious-looking television with ultra-slim bezels on all four sides. The bottom half of the chassis does bulge out at the back to accommodate internals, but the panel above is wonderfully slender and everything rests on a central metallic sloping stand.

All of the connections are located at the rear left of the panel, with some facing the rear and others facing the left-hand side. These include four HDMI 2.1 inputs that support the key HDMI 2.1 features. Namely, VRR (Variable Refresh Rate), ALLM (Auto Low Latency Mode), 4K at 120Hz and eARC (enhanced Audio Return Channel).

Incidentally, this is the highest number of HDMI 2.1 ports you’ll find on any 2020 TV. Samsung’s latest QLEDs have a maximum of one, and the Sony XH90 has two – or at least it will, following an upcoming firmware update. The latest models from Panasonic, Philips and Hisense don’t have any HDMI 2.1 inputs at all.

The LG’s speakers are above average by flat-screen TV standards, with a sufficient level of volume and bass to get you by. But, let’s face it, if you’re spending this much money on a TV then an external speaker system or good-quality soundbar is essential. In addition to the lossless audio passthrough of eARC, the LG CX also supports Dolby Atmos decoding, so there are plenty of quick, easy routes to superb quality surround sound.

That said, it’s worth mentioning that LG has removed DTS decoding for the CX range. LG apparently feels that DTS is unnecessary since it’s not supported by any of the big streaming players – Disney Plus, Amazon Prime Video and Netflix all use Dolby Digital Plus. This does mean that the CX cannot perform DTS:X passthrough over eARC, which may be an issue depending on your home theatre setup.

As mentioned, the CX runs the latest version of LG’s WebOS smart TV platform. WebOS looks and operates much the same as it did last year, although LG has given the bottom of the screen a minor facelift; it now features a two-tier display instead of a single row.

Our favourite feature of WebOS is Magic Remote, an intuitive scrolling function that works by simply pointing the remote at the screen. It sounds underwhelming, but it’s genuinely useful in practice.

UPDATE: LG has now added BBC iPlayer to its 2020 TVs including the LG CX

App coverage is another story. Yes, you get access to all of the paid streaming platforms, but Freeview Play is noticeably absent. LG has failed to come to an agreement with Freeview this year, meaning that all of LG’s 2020 TVs lack major UK catch-up apps such as ITV Hub and All4. We’ve been informed that LG is negotiating with each player individually to secure these apps, but it’s been months since launch and none of them have appeared.

Although this isn’t ideal, it needn’t be a deal-breaker, as you can always buy a Roku streaming device or Amazon Fire TV Stick to fill in the app gap.

The CX’s OLED panel gives it one big advantage over its brighter LCD-screened rivals: true, inky blacks. Whereas LCD TVs rely on LED backlighting and can only produce extremely dark greys, OLED displays can completely turn off individual pixels at will, allowing them to replicate true black on a per-pixel basis. This creates the perfect backdrop for impactful, high-contrast HDR images, and in practice goes a long way towards making up for OLED’s lower peak brightness.

On the LG CX panel, colour vibrancy is astonishing, and the near-black gradation is even more refined than on last year’s C9 OLED panel. This results in cleaner, clearer detail within shadows, with less of the noise that affected the C9. Colour accuracy is excellent right out of the box, too, and after calibration it’s excellent.

Once we’d calibrated our review unit, we measured its luminance at 680cd/m2 on a 10% window and 125cd/m2 full-field. Compared to a high-end Samsung QLED, that’s really not that bright but in a properly darkened environment, it still looks amazing. One of the new modes, Filmmaker, only hits a peak brightness of 100cd/m2. Though this is perfect for a dimly-lit grading suite, it may not be bright enough for most people viewing at home, particularly if any lights are left on.

Brightness uniformity is remarkable too, with no signs of banding, dirty screen effect or colour tinting anywhere on our panel. Its dark uniformity is fairly typical of consumer OLEDs, exhibiting thin vertical streaks on dark grey slides.

As for colour reproduction, the LG CX impresses once again, covering 99% of the DCI-P3 gamut and 76% of Rec2020. Cinema colourists grade digital films using the DCI-P3 colour space, and with the LG CX, you’re seeing practically every single hue that they see in their high-end mastering suites.

The LG CX’s panel handles reflections well, minimising light diffusion, so you don’t need to have blackout curtains to enjoy your movies. It also has wide viewing angles too, making it a great choice if your furniture isn’t placed head-on with the TV.

LG has made a concerted effort to improve the motion handling on the CX over last year’s C9. Firstly, LG has lowered the intensity of 120Hz black frame insertion (BFI). This has the intended effect of reducing motion blur while also eliminating typical side effects of BFI like flickering and severe brightness drops.

The CX doesn’t just excel with 4K content. That cutting-edge Alpha 9 Gen 3 chipset does a fine job of processing 720p and 1080p sources and rendering them in high-quality upscaled 4K. And, new for 2020, the LG can finally disable overscan on standard-definition content, meaning that the picture won’t be cropped unnecessarily.

Just like last year’s C9, the LG CX supports the HDR10, Hybrid-Log Gamma (HLG) and Dolby Vision HDR formats. The lack of HDR10+ is a shame, but it’s not a big deal in the scheme of things. HDR10+ has lost traction in recent times, especially now that Samsung has ceased production of its HDR10+ 4K Blu-ray players. What’s more, the only major streaming service to support HDR10+ is Amazon Prime Video; Netflix, Disney Plus and Apple TV have all gone for Dolby Vision.

The CX’s pixel-level light control delivers a refined, impactful HDR presentation. Its full-screen brightness is no match for the high-nit LCDs from Samsung and Sony, but the panel’s incredible contrast level more than makes up for this. Provided, that is, the ambient lighting isn't too bright – like most OLED TVs, the LG thrives in darker living rooms.

HDR playback isn’t perfect out of the box, however. The CX has a tendency to over brighten darker scenes in HDR, elevating the blacks unnecessarily. It’s not a major problem and was mainly apparent on Dolby Vision content from Netflix.

To bolster its Dolby Vision playback, the CX now supports Dolby Vision IQ. This feature makes use of built-in light sensors to adjust picture brightness based on Dolby Vision’s dynamic content metadata. This way, the details of a scene aren’t lost due to the ambient lighting in the room. Dolby Vision IQ’s brightness effect is a little excessive at its default settings, though this is only really noticeable in a darkened room. In any case, full calibration is recommended to get the most out of the feature.

Thanks to its four HDMI 2.1 ports, the LG CX is better-equipped for gaming than any other 2020 TV. It can run games in 4K at 120Hz, and its VRR technology – which includes both Nvidia G-Sync and AMD Freesync – allows for fantastically smooth, tear-free performance. Meanwhile, ALLM automatically kicks the TV into its low latency Game Mode when compatible consoles are connected.

Response times in Game Mode are remarkable. We measured an input lag of 13ms on a 60Hz signal (both 1080p and 4K HDR), and this halved to a blazingly fast 6ms on a 120Hz signal. To achieve such a low input lag, the Alpha 9 Gen 3 chipset has to tune down its picture processing quite considerably. Despite this, the CX’s superb picture quality barely degrades at all in Game Mode. If there is one TV gamers should buy ahead of the launch of the Xbox Series X and PlayStation 5, this is it.

Of course, as with any OLED TV, there is a risk of screen burn-in with the LG CX. Provided you watch a variety of content, and don’t leave your games paused for hours at a time, this shouldn’t be an issue.

READ NEXT: The best 4K HDR TVs for gaming

The LG CX is an accomplished all-rounder that’s destined to become a firm favourite for home cinema buffs and game enthusiasts. Following in the footsteps of the LG C9, it delivers phenomenal colour accuracy, true blacks and stunning HDR playback across multiple formats. Somehow, its gaming performance is even better than the OLED C9’s, with response times that best any TV we’ve tested to date.

Although we generally encourage readers to calibrate their high-end TVs, with the LG CX, you arguably won’t even need it. In the right picture modes, the CX’s picture is pretty close to perfection. With the 48in model available for under £1,500 even at launch, it’s hard to imagine that any rival 2020 OLED will be able to compete.