As the sole manufacturer of commercial OLED panels on the planet, you'd expect LG to be a bit of dab hand at making OLED TVs. After a litany of five-star reviews for its 2017 and 2018 OLED families, LG only had one major problem: the 9 series was going to have to be amazing to live up to everyone's expectations.

So, it really won't come as any surprise if we tell you this: the new LG C9 is indeed rather fantastic. You should definitely think about buying one. Need a little more persuading? Let us explain.

The C9 is the second-most affordable model in LG’s 2019 OLED TV family, but it has one crucial difference to its cheaper stablemate. While the cheaper B9 uses the Alpha 7 Gen 2 processor, the C9 models and above use LG’s most advanced Alpha 9 Gen 2 processor. In short, if you want the ultimate in OLED image quality, the C9 is the cheapest option in LG’s 2019 lineup. It's available in three screen sizes, namely the 55in LG OLED55C9, the 65in OLED65C9 we have here and the massive 77in OLED77C9.

One of its killer features – and one which is common to all LG's 2019 OLEDs, including the C9 – is the most comprehensive HDMI 2.1 support on the market. Or at least it is at the time of writing. You get four full-bandwidth 48Gbits/sec HDMI 2.1 ports for 120Hz 4K video playback, enhanced ARC (eARC) for lossless audio transmission over the Audio Return Channel, and variable refresh rate (VRR) for smoother gaming without tearing or frame drops. The cherry on top is Auto Low Latency Mode (ALLM), which automatically switches the TV into low-lag game mode for more responsive gaming.

Other features include a latest generation UHD (3840 x 2160) OLED panel, second-gen Alpha 9 video processor with AI picture technology, HDR support for HDR10, broadcast-friendly HLG and Dolby Vision (but not HDR10+ formats). That’s not all, though: the whole kaboodle runs on LG’s excellent ThinQ AI Smart TV platform, you also get WISA wireless speakers compatibility and an Apple TV app and integrated AirPlay 2 support are set to arrive with a forthcoming firmware update.

LG was first out of the gates in terms of 2019 OLEDs, so ironically the C9’s main competition is last year's C8. At around £1,000 cheaper, the C8 is a bit of a bargain right now. If you can live without the HDMI 2.1 features and don’t mind missing out on the various image quality improvements, the C8 is a superb TV. 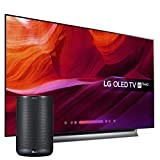 As per usual, though, LG’s pricing for its new ranges is pretty aggressive. The C9 is priced competitively against new OLED models from Panasonic and Sony, and the 65in model we have here was a not inconsiderable £500 cheaper than Samsung's 65Q90R (£3,799) at the time of writing. And don’t forget: none of these rivals will support HDMI 2.1 to the extent that the LG OLED65C9 does.

If you can’t countenance anything less than the slimmest TV in your living space, the C9 will be right up your boudoir. As OLED technology doesn’t need chunky backlights – a relative downside of LCD-based TVs – the C9’s bezel and the panel itself are outrageously thin. The bottom part of the chassis does bulge out to accommodate the internal electronics, but it’s not overly bulky – and the solid-feeling, brushed-metal stand both looks great and provides stable support.

Peer around the left-hand side of the TV and you’ll discover four full-bandwidth HDMI 2.1 inputs. Home cinema buffs will be especially pleased that this heralds the arrival of eARC support – you can now successfully transmit the lossless Dolby Atmos TrueHD audio stream from a 4K Blu-ray player to the TV and then onwards to an AV receiver.

The supplied Magic Remote is largely the same as LG’s 2017 and 2018 models, and this is no bad thing. It works seamlessly and intuitively throughout LG’s excellent webOS system. Make no mistake, webOS remains the smart TV platform to beat.

Despite the TV's thin chassis, the C9's sound quality is better than many televisions we've tested thanks to some clever tuning. It kicks out some surprisingly decent bass. If you’re thinking of skimping on a soundbar though, don’t – the images produced by a TV of this calibre deserve to be accompanied by equally refined audio.

Seeing OLED for the first time is something special – and with good reason. Unlike the very dark greys of LCD technology, OLED is capable of creating true, lightless pitch-blacks. This creates the ideal canvas for colours to flourish and images to really pop off the screen.

The technology isn’t without its weaknesses, however. As we've observed over the past few years, what separates the truly great OLEDs is not how they deal with true black, but how they handle the very darkest tones before they fade to black – a facet of performance referred to as “near-black presentation”.

Suffice to say, the C9 is the cleanest OLED yet from LG in this regard, and this is due to LG’s decision to judiciously apply a technique known as “dithering”. Dithering actually adds noise to the image – something that sounds counter-productive – but it does this in order to mask those other more unsightly issues.

Indeed, move close to the screen and you’ll be able to see the fuzz of dithering in action, but from a sensible viewing distance, it disappears. The dither serves to obscure OLED's telltale flickering and flashing near-black artefacts, and it's so effective that those artefacts are rendered invisible in real-world viewing. The result? You can see far more shadow detail simply because it's less obscured by technical issues such as macroblocking and posterisation.

This is obviously great news, but it only gets better once you examine the C9’s colour performance. After calibration, our LG OLED65C9 review unit delivered supremely accurate colours with both SDR and HDR content. Rest assured, you’re seeing your favourite movies and TV exactly as the director intended.

The LG OLED65C9 is a bit of a dab hand at upscaling, too. The Alpha 9 Gen 2 processor does a fine job of retrieving sharp detail from less-than-4K sources, even if it does do so with a touch more ringing and fizziness than its Samsung and Sony rivals. One new addition for 2019 is that the decontouring filter has been given its own setting called Smooth Gradation. As the name suggests, this does a good job of smoothing the subtle blends between various hues of colour – an area where a type of blocky artefacting known as posterisation can rear its head – but it does scrub away a bit of fine detail in the process.

Motion performance is largely unchanged from 2018 LG OLED TVs: it’s pretty darn good across the board. One key difference is that the TruMotion “Clear” setting has been tweaked to lessen soap opera effect and interpolation artefacts, but if you're a purist you'll want to turn it off anyway. Slow panning shots in 24 frames per second movies are handled correctly, though, and there’s not a hint of judder. Sadly, the black frame insertion feature still results in too much flicker to be used comfortably, and particularly so in brighter scenes. It also causes visible judder in 24Hz films, so we’d advise leaving it off.

The C9 doesn't have any horrible weaknesses, but you can find some minor issues if you go looking for them. For instance, we couldn’t notice any dirty screen effect on our grey test slides, but pull up an all-white screen and it's possible to notice some mild colour tinting if you stare long enough. We were hard-pressed to pick it up in real-world viewing, though. As with all consumer OLED TVs, there is also some telltale vertical streaking in very dark scenes if you look closely, but it didn't bother us while watching content.

For HDR, peak brightness on our calibrated review unit measured 700cd/m² on a 10% window and 145cd/m² full-field. That might sound underwhelming after reading about LCD sets that peak over 1,500cd/m², but a peak brightness of 700cd/m² is still more than enough to deliver an excellent HDR experience – and this is mainly due to OLED's pixel-level light control.

Where top-end LCD sets employ hundreds of backlight zones to produce HDR effects, OLED technology allows every single one of the C9’s 8.3 million pixels to turn on and off independently – each pixel is effectively its own backlight. This means that an OLED TV can display intense white on one pixel and absolute black on an adjacent pixel just a fraction of a millimetre away, a precision that LCD-based TVs can only dream of.

It allows for an insanely high dynamic range and contrast, and this gives you that HDR pop. Combine this with a top-notch DCI-P3 colour gamut coverage of 99%, and the results are stupendous. We watched the FA Cup Final in HLG HDR through the BBC iPlayer app on the C9, and were suitably impressed by the uptick in dynamic range, wide colour gamut and resolution.

Avid gamers will be pleased: the C9’s input lag puts it at the top of its class. We measured 13ms in both 1080p SDR and also 4K HDR game modes, which is the most responsive yet from a consumer television in 2019.

Furthermore, the C9 is equipped with ALLM (Auto Low Latency Mode) – labelled by LG as Instant Game Response – that automatically switches the TV into its low-lag gaming mode during gameplay. The final HDMI 2.1 feature is variable refresh rate (VRR), which reduces frame drop and screen tearing. Using an EDID reader, we confirmed the C9's VRR range to be between 40Hz and 120Hz – and, in practice, this is a huge boon for crystal clear gaming performance.

It would be remiss of us to mention OLED and gaming in the same sentence without talking about burn-in or screenburn. While there's a risk even on the very latest OLED TVs, from our experience it's extremely low – it’s something which has been blown out of proportion. If it is one of your major concerns, then be reassured: the LG C9 is even more resistant than previous generations. The updated 2019 OLED panel now employs a larger red subpixel to combat the issue, and the C9 judiciously – and imperceptibly – dims the image when it detects a static logo.

It would be easy to write off the LG C9 as nothing more than a C8 with a handful of extra features, but it’s much more than that. Its gaming prowess is considerably improved over the previous generation, and LG stands uncontested as the only TV manufacturer to offer the most comprehensive set of HDMI 2.1 features in 2019. LG’s engineers have also proven themselves by taking feedback onboard and swiftly addressing any bugs through firmware updates, which is fantastic to see.

Factor in the outstanding picture quality and the competitive launch pricing and the C9 is another OLED-encrusted jewel in LG’s crown. It’s a must-audition if you're considering buying a high-end TV this year.