The LG C1 is the latest addition to a lineup that has dominated the mid-range 4K OLED TV market since its initial release. The reasons for this are simple: it’s competitively priced, looks great and delivers superb image accuracy. There’s also support for Dolby Vision and Dolby Atmos, a host of gaming features, and an upgraded version of LG’s intuitive webOS smart platform.

LG C1 OLED review: What you need to know

Confusingly, there are three versions of the LG C1 in the UK: the C16LA reviewed here, the C14LB and the C15LA. The latter is exclusive to Currys PC World, while the remaining two will be split between all the other retailers. The C14LB has a dark grey rear panel, with the other two using white, but otherwise, all three TVs are identical in terms of specifications, picture quality and features.

The C1 runs the latest version of LG’s webOS smart platform, and supports HDR10, Dolby Vision and HLG – but not HDR10+. All the major content streaming platforms are present and correct, including Freeview Play, which was absent on LG’s TVs last year.

The most affordable LG C1, the 48in variant, currently costs £1,299 , which is extremely competitive for a brand new OLED. Of course, prices go up steadily from there. Retailers are asking £1,699 for the 55in model, £2,499 for the 65in model and a surprisingly reasonable £3,999 for the huge 77in screen . LG has yet to announce availability and pricing for its new, and frankly gigantic, 83in model.

Sony remains a strong competitor in the OLED market, although this year its mid-range A80 65in OLED retails for slightly more than the 65in LG at £2,699. Panasonic has largely concentrated on the higher end of the OLED market in 2021, but this year’s entry-level JZ980 ( starting from £1,899 ) will not only include most of the features found on the manufacturer’s more expensive TVs but also add a 48in version to accompany the 55in and 65in models.

More interested in LCDs? Samsung continues to dominate this market with a range of new 4K and 8K Neo QLED models that now make use of Mini LEDs in the backlight. The flagship 4K model is the QN95A, the 65in version of which can be picked up for £2,999 , while the range also includes 55in, 75in and 85in versions. For bright room performance, LCD models still have a significant advantage over OLED panels, though they can’t compete with their pixel-level control and infinity:1 contrast ratios.

The LG C1 continues to use the same basic design as previous generations, with a minimalist appearance, a virtually bezel-free screen and a sloping brushed-metal stand. You can also wall-mount the TV using a standard 300 x 200 VESA bracket, but remember the fixings are lower down the panel. The panel itself is mere millimetres thick at the top but widens out to 47mm at the bottom, where the electronics, speakers and connections are housed. In terms of dimensions, this 65in TV measures 1,449mm wide and 862mm high, while the stand is 998mm wide and 251mm deep. 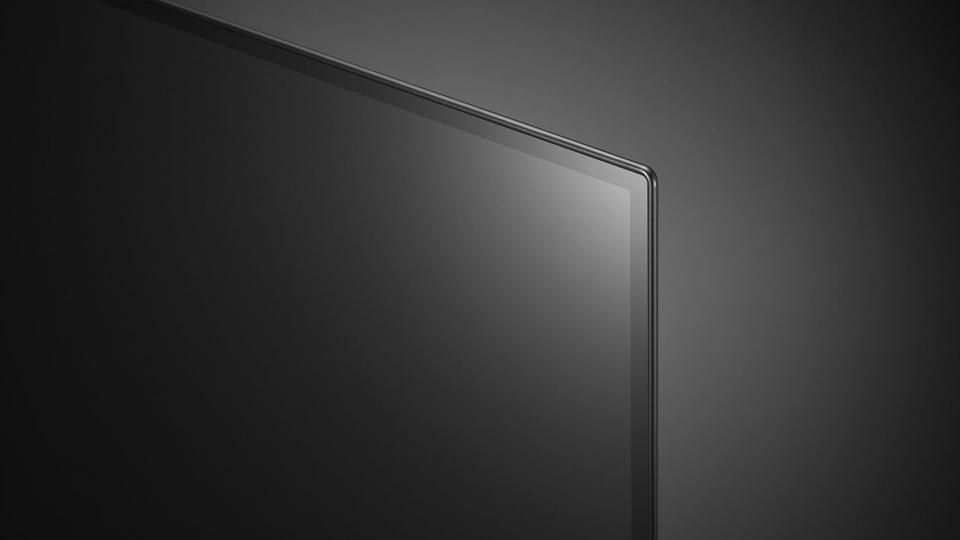 All the connections are located at the back left of the panel, with some facing the rear and others facing the left-hand side. These include four HDMI 2.1 inputs that support HDR, VRR (Variable Refresh Rate), ALLM (Auto Low Latency Mode), 4K at 120Hz and eARC (enhanced Audio Return Channel). 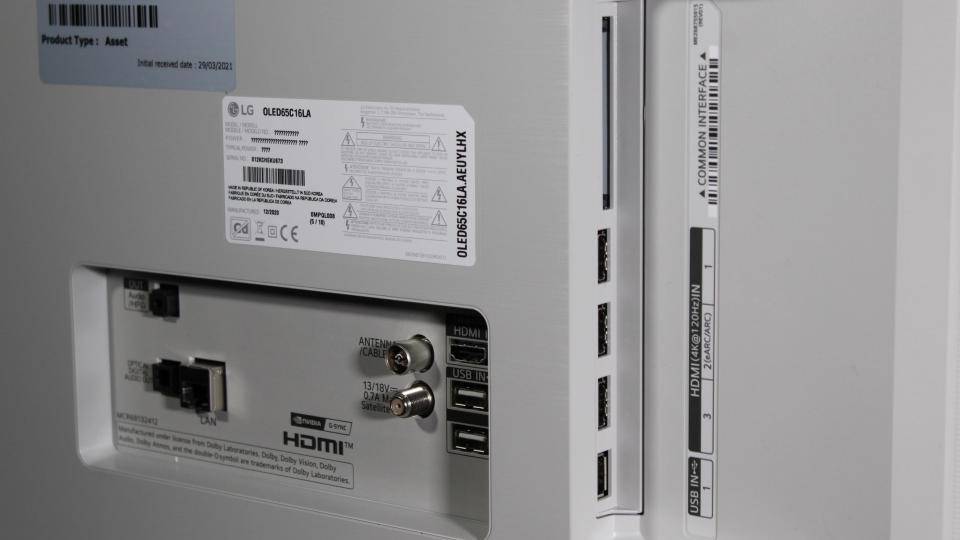 There are also terrestrial and satellite tuners, a 3.5mm audio output, an optical digital output, an Ethernet port, three USB ports (two 2.0 and one 3.0) and a CI (common interface) slot. For wireless connectivity, there’s built-in dual-band Wi-Fi, Bluetooth and support for Apple AirPlay 2.

LG’s Magic Remote has been given a makeover this year, and while it’s still finished in a combination of gloss and matte black, the redesigned shape is more elegant and comfortable to hold, while the onscreen cursor-style pointer remains a joy to use.

The main difference this year is that a few buttons have been dropped, allowing for the addition of direct access to Rakuten TV and Disney Plus, along with activation buttons for built-in Alexa and Google assistants. There’s also a microphone for voice interaction and a newly added NFC tag.

The LG C1 runs the latest version of the company’s webOS smart platform, which moves away from the clean and simple launcher bar along the bottom of the screen, and instead adopts a full-screen home page that feels rather crowded and confusing.

Thankfully the changes are largely cosmetic, and aside from adding more rows via the expanded home page, the features are primarily the same. At the top are three blocks for information (or adverts), followed by what’s trending, a row of all the apps, the Home Dashboard with all the connected devices, a row showing new releases and, finally, rows dedicated to specific apps.

The interaction remains slick, responsive, customisable and easy to navigate thanks to the Magic Remote. The platform is also pleasingly agnostic, with support for Apple, Amazon Alexa and Google Assistant, turning the C1 into a fully functioning smart assistant with voice control.

The absence of Freeview Play last year was frustrating, but thankfully LG reached an agreement for 2021, so the C1 has a full complement of UK catch-up apps. It also boasts every other streaming platform you can think of, including Netflix, Amazon Prime Video, Disney Plus, Apple TV and Now (formerly Now TV).

The LG C1 retains all the benefits associated with a self-emissive technology like OLED, which means deep and inky blacks, excellent shadow detail and bright highlights delivered with precision. An LCD TV might generate increased luminance, especially on a full-field image, but in terms of pure contrast, OLED is the superior display technology.

The C1’s overall screen uniformity is excellent, with no signs of banding, dirty screen effect or colour tinting anywhere on my review panel. It also handles reflections well, minimising light diffusion, while the viewing angles are very wide, ensuring everyone in the lounge enjoys an optimal image, no matter where they’re sitting.

Filmmaker Mode is the most accurate picture setting out of the box, although it uses a peak brightness of 100cd/m², which is meant to replicate a professional monitor in a dimly lit grading suite. For a normal living room, the brighter ISF settings may be preferable and are equally as accurate – just remember to turn the TruMotion setting off for movies.

The C1’s motion handling is excellent, and the TruMotion menu offers five different options: Off, Cinematic Movement, Natural, Smooth Movement and User Selection. The Filmmaker Mode, plus any purists susceptible to the unwanted effects of movie motion smoothing, will turn TruMotion off, but others will enjoy experimenting with the settings.

The beautiful photography on the Blu-ray of Samara looks so good you’d swear it was native 4K, with perfectly rendered details and gorgeously natural landscapes. Thanks to OLED’s awesome contrast, the tumbling astronauts in Gravity really pop against the blackness of space, and the zero-g action moves with a fluidity that’s free of any judder or other artefacts.

The new Alpha 9 Gen 4 chipset ensures that lower-resolution content also looks good by applying AI-enhanced upscaling to 720p and 1080p sources. Blue Bloods on Now looks surprisingly watchable despite the lower resolution, with the processor upscaling the image as effectively as possible, while also applying noise reduction and sharpening where appropriate.

The LG C1 is a stellar performer when it comes to high dynamic range, with the Filmmaker mode offering highly accurate images for HDR10 and HLG, while the Cinema mode does the same for Dolby Vision. The Cinema Home mode, which uses a built-in light sensor to adjust picture brightness based on dynamic content metadata, can prove particularly useful when watching during the day.

In terms of measurements, the C1 impresses, with a luminance of 710cd/m² on a 10% window and 135cd/m² on a full-field pattern. The self-emissive nature of OLED means the combination of deep blacks and pixel-precise highlights creates a staggering dynamic range. In addition, the near-black gradation is wonderfully refined, drawing every last detail out of the shadows.

The colour performance is equally impressive, with the LG hitting 99% of the DCI-P3 colour space. This means you’re getting the full benefit of HDR’s wider colour gamut, and the results are often breathtaking. The 4K disc of Guardians of the Galaxy Vol. 2 looks amazing, with the rich and vibrant colours popping off the screen like a Day-Glo fever dream.

The LG C1 is a fantastic TV for next-gen console gamers, with four HDMI 2.1 ports that support 4K at 120Hz, and VRR – including Nvidia G-Sync and AMD FreeSync. As a result, gameplay is exciting, smooth and tear-free. In addition, the inclusion of ALLM means the TV automatically switches to the low-latency Game Optimiser mode when compatible consoles are detected.

Speaking of which, the response times in the dedicated Game Optimiser mode are exceptional. I measured an input lag of 12ms on a 60Hz signal (both 1080p and 4K HDR), and this halved to an insanely fast 6ms on a 120Hz signal. This year LG has added a Prevent Input Delay (Input Lag) setting that can boost the response for 60Hz content, reducing the delay to below 10ms.

Playing Horizon Zero Dawn on the PS4 allowed the C1 to demonstrate all of its gaming strengths – from smooth motion and detailed images to the precisely delivered metallic gleam of the robots. Whatever your preferred gaming genre the LG is sure to please, and the risk of screen burn is minimal if you’re sensible, watch a variety of content, and don’t leave games paused for hours on end.

The LG C1 boasts a surprisingly effective sound system considering its slimline chassis. Hidden inside is a 2.2-channel sound system with 40W of power, and thanks to the sloped stand the audio from the downward-firing speakers is redirected towards the listener, creating a decent front soundstage that has width and a degree of stereo separation.

The sound can be tuned depending on whether the C1 is stand-mounted or wall-mounted, and LG includes AI Acoustic Tuning to help users optimise the sound for their specific environment. There are a number of sound modes, including Standard, Clear Voice Pro, Cinema, Music, Sports and Game Optimiser, along with AI Sound Pro for upmixing the audio using psychoacoustic processing.

The latter also allows the C1 to support Dolby Atmos decoding, and while it’s never going to replace actual surround and overhead speakers, it does give the audio a greater sense of space and dimensionality. There’s sufficient volume and even a degree of bass delivery, but if you want the best from your large screen TV, you should invest in a good-quality soundbar.

The LG C1 is an impressive all-rounder that is sure to delight TV addicts, movie fans and avid gamers alike. This OLED looks stylish, is well made and boasts a host of useful features. The Magic Remote remains a joy, webOS is as slick and comprehensive as ever (even if the redesign feels like a step backwards) and the sound quality is surprisingly good considering the ultra-slim panel.

An extensive selection of gaming-specific features and unbelievably fast response times will please competitive and casual gamers, while the incredibly accurate SDR and HDR images are so stunning they’re sure to put a smile on the most demanding film enthusiast’s face. Best of all, the C1 won’t break the bank, with competitive pricing that ensures this TV is the OLED to beat.