OLED technology is getting more affordable every year. If you doubt it, take a look at the price tag of the LG BX, the entry-level 4K OLED from LG for 2020. The 55in model landed in the UK for an astonishingly low £1,399 and has since come down in price by about £200, making it one of the cheapest OLEDs on the market.

Despite the low price, the LG BX is packed with high-end features. With multi-HDR support, HDMI 2.1 connectivity and next-gen gaming features such as VRR and 4K 120Hz playback, the BX is a remarkably well-rounded TV. Being an OLED, it offers great viewing angles and can naturally produce vibrant colours and true black levels that regular LED and QLED TVs cannot match.

Is there really any reason not to buy the LG BX, then? Read on for a deep dive into the BX’s specs and to find out if it’s right for you.

LG BX OLED: What you need to know

The LG BX has an OLED panel with a 4K/UHD (3,840 x 2,160) resolution and a 120Hz refresh rate. OLED, short for Organic Light-Emitting Diode, is a self-emissive panel technology, which means that it doesn’t require the LED backlighting used by standard LCD TVs. Each pixel acts as its own light source and can be turned on or off at will by the TV. As a result, OLEDs like the LG BX have an extremely high contrast ratio with much deeper black (or true black) levels than LCD TVs. They also benefit from wide viewing angles, so can be enjoyed from anywhere in the room.

The high contrast ratio and pixel-level control of OLED panels make for a stunning High Dynamic Range (HDR) experience. LG’s BX supports three HDR formats: HDR10, the broadcast-friendly Hybrid Log-Gamma and Dolby Vision. You’re missing out on HDR10+, but Dolby Vision is considered the superior dynamic HDR format because it has higher colour bit depth support. What’s more, Netflix, Disney Plus and Apple TV have all chosen to invest in Dolby Vision over HDR10+. And if you’re a Blu-ray collector, you’ll know that there are very few HDR10+ titles compared to the vast library of Dolby Vision Blu-rays out there.

LG’s BX has four HDMI inputs, two of which are HDMI 2.1. In addition to eARC for lossless audio passthrough, it also supports Dolby Atmos decoding – though sadly not DTS. More interesting, especially if you’re a gamer, are the VRR and 4K 120Hz playback capabilities of HDMI 2.1. With VRR (Variable Refresh Rate) enabled, the TV’s refresh rate adjusts to the current frame rate of whatever game you’re playing, eliminating frame tearing. Unlike most 2020 TVs with VRR, LG’s latest OLEDs support both Nvidia G-Sync and AMD FreeSync.

ALLM (Auto Low-Latency Mode) is another useful gaming feature carried by the LG BX, automatically kicking the TV into Game Mode when compatible consoles are connected to achieve much faster response times. While we haven’t had a chance to test the response times of the LG BX, the LG CX model we reviewed delivered the lowest input lag we’ve ever seen in a TV. For anyone planning on buying a PS5 or Xbox Series X, the LG BX is one of the best TVs you can buy. More specifically, if you want an OLED TV that has next-gen gaming capabilities, this is the most affordable model on the market.

OLED panels do come with a small risk of image burn-in, but this is only really a concern if you watch the same news channel or play the same game for thousands and thousands of hours on end. Small objects like logos and game HUDs do have the potential to be permanently burned into the panel, so varied use is recommended.

Like all LG TVs, the BX runs LG’s WebOS smart platform. It’s one of our favourite smart TV platforms because it’s so easy to use, and that’s in large part thanks to its Magic Remote software, which lets you scroll around the UI using a remote-controlled cursor. WebOS has its own built-in LG Voice Search function and can be paired with Google Home and Amazon Alexa devices too. You do get most of the major streaming platforms (Netflix, Disney Plus, Now TV, Amazon Prime Video and more) but there is a bit of an issue with UK catch-up apps this year.

LG failed to come to an agreement with Freeview Play for its 2020 TVs, so the usual roster of UK streaming apps aren’t supported. BBC iPlayer was added in August but ITV Hub, All 4 and My5 have yet to appear. Of course, you could always get around the issue with a cheap Roku streamer or Amazon Fire TV Stick .

Right from launch, the LG BX was one of the most keenly priced 4K OLED TVs of the year, and subsequent discounts have made it arguably the best value OLED out there. The 55in model started out at £1,399, which is £400 less than the RRP of its more premium sibling, the LG CX 55in . Nowadays, the average price online is £1,199 and we’ve even seen it for as low as £1,099. It’s already a steal and if it comes down much further in the holiday sales it’ll be the theft of the century. 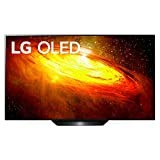 The larger LG BX 65in is considerably more expensive, having launched at £2,299, but again the price has gradually come down – you can now grab it for £1,999 . Again, that’s astonishing value for an OLED TV of its size, and you’d do well to keep your eyes on the price around Black Friday season.

For our money, the LG BX’s main competitor is its own 2020 stablemate, the LG CX. It’s our favourite all-around OLED of the year and, like the BX, it’s become more affordable in recent months: the 55in model we reviewed is now only £1,399 . That’s a £400 reduction, making it (somewhat unbelievably) cheaper than the entry-level LG CX 48in model, which costs £1,499 .

It has the second-highest brightness of any 2020 OLED and covers every HDR format including HDR10+, which of course is missing from LG’s models. But there’s bad news for gamers. The 805 only has a 60Hz refresh rate and it also lacks HDMI 2.1 inputs, which means you get no 4K 120Hz playback or Variable Refresh Rate. What’s more, the 805’s prices have yet to drop, meaning you'll get more for your money with a discounted LG BX or LG CX.