When interior designer Jessica Helgerson first stepped into her clients’ 1936 architect-designed Tudor in a hilly Portland, Oregon, neighborhood, she knew they had found something special. “We loved that the home had a sense of history and design that hearkened back to an earlier era,” the homeowner says. Remnants of age (and a renovation in the 1980s) were certainly evident, as in the home’s blue-granite kitchen or the bathroom donned in peach acrylic. “It was not so great,” Helgerson admits of the initial walkthrough, though, she's quick to add, “it was also fabulous.” Just like the homeowner, her team was able to look past the quirks to the innate charm of the early-20th-century build: things like pitched ceilings, handsome built-ins, and “gorgeous Portland views.” For Helgerson, the challenge was meeting the contemporary needs of her clients while remaining sensitive to the home’s original architecture. “We wanted to do right by the house,” says the designer. 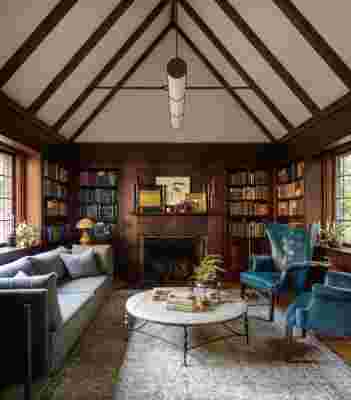 The library beckons with a pair of brightly colored wingbacks from Anthropologie; Neri&Hu’s Frame sofa for De La Espada sits opposite. The mantel plays host to works by a bevy of local artists, including Sandee Burman, Tom Hardy, and Yvonne C. Branchflower.

And so began the years-long renovation, which started with the floor plan. The kitchen, which was secluded from the rest of the common spaces, was given prime real estate off a main hallway, with a new adjacency to the family room. In its place, Helgerson incorporated a walk-in butler’s pantry. The now wood-paneled space fits right in with the home’s 1936 bones. Throughout the home, new architectural details were approached with the same care and craftsmanship as were surely paid to the home’s original features. In the family room, it was the homeowners who suggested brightening up the cavernous yet gloomy space. Helgerson added French doors that open to a sunny terrace; existing banquettes were enlarged to accommodate frequent entertaining; and lighting was layered in throughout.

The master bedroom and bathroom were completely overhauled. Exposed rafters and intricate woodwork were added to each space, keeping with the spirit of the renovation, while modern decor elements, like a chandelier by Apparatus, hint at the homeowners’ contemporary, style-forward aesthetic. The same philosophy was followed throughout the rest of the interiors. Wingbacks from Anthropologie were cast alongside an antique coffee table in the library, and in the nursery a vintage Milo Baughman rocker is perched below a brass mobile by Antwerp-based designer Corinne van Havre. “We are very conscious and respectful with all the permanent things that we do,” Helgerson notes. “But we are not living in period sets.” 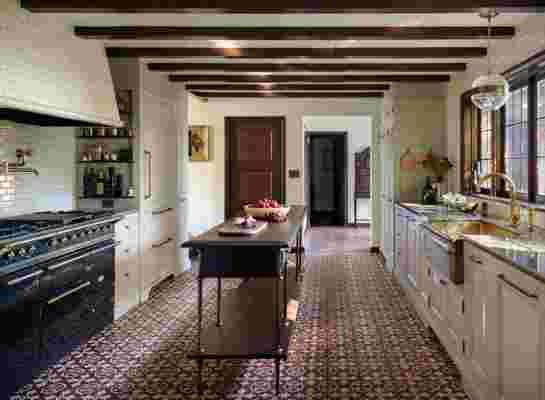 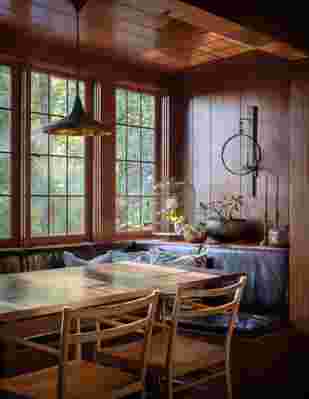