Bowers and Wilkins is one of the most respected names in home audio, but unless you're serious about sound there's a good chance you won't have heard a B&W system in the flesh. That's why the company has been developing a PA system that can be taken on the road, letting festival goers hear the difference for themselves. We got to hear the simply-named Sound System for ourselves when it made its UK debut at the WOMAD festival Charlton Park, and spoke to Brand Director Danny Haikin to find out how it came into existence.

"One of the obstacles we face in terms of growing B&W is that very few people have a reference for real sound - meaning clear, undistorted sound. Most of our equipment is designed for three of four people to listen in a lounge or studio ," Haikin explained . "We wanted to find a way to exposing thousands of people. We had a long chat with our engineers and we devised a setup for essentially zooming a domestic loudspeaker to the size of a small PA rig, without using any of the compromises that PA companies are forced to make.

Sound System is a modular stack, comprised of a subwoofer module and an upper bass, mid-range and treble module. It's a point sourced line array, so could technically be hung for outdoor venues, but was designed primarily as a free-standing system. It wasn't built to full height at WOMAD because of the capacity of the dome being used to house the stage, but the full system could comfortably play to several thousand people. "It couldn't possibly do an arena, it's really designed to make pre-recorded music sound good," Haikin said. "It's best for small live events, domes and festivals, but it would be great for clubs; it's a project we might look at in the future."

Sound System is huge; each of the four speaker stacks in place at WOMAD's Society of Sound stage take up a huge corner of the dome. They look fantastic, with exposed speaker cones and illuminated B&W branding, but they aren't likely to replace the traditional PA system. It requires a massive amount of power and is very inefficient compared to other PA systems for the volume of sound it is able to deliver, but that would be missing the point. "If you're going to sell a system of this size there's all sorts of practical considerations that you immediately have to deal with." Haikin explained. Bowers and Wilkins isn't selling Sound System, however; it's being used solely as a brand awareness exercise, so the company could concentrate on sound quality above all else. 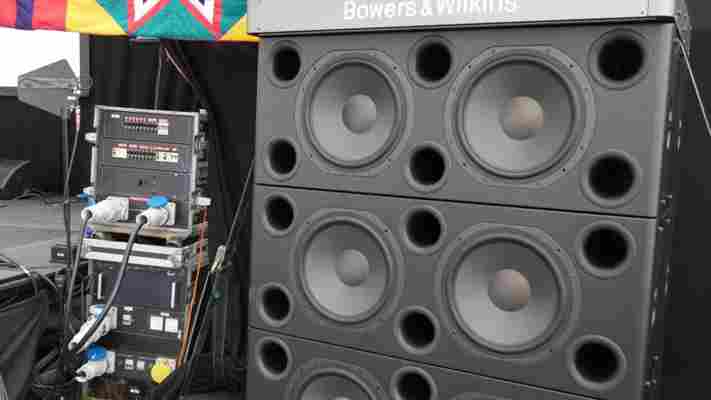 That work certainly paid off during our visit at WOMAD; the system produces an incredibly flat response compared to traditional festival speakers, with vocals and high-end detail shining through where they would otherwise be lost. It added new depth to acoustic performances, letting the audience here every nuanced detail from guitars and pianos, with bass making itself heard during more eclectic tracks. It managed to avoid sounding boomy, yet still shake the ground around our feet. "Because it's so clean and open, you hear so much and the sound it almost velvety," Haikin said. "people immediately get a sense of the system." The sound was so clean that there was practically silence in the room during an acoustic guitar performance after our interview. Even the WOMAD crowd, traditionally very particular about brand names trying to muscle their way the festival, seemed impressed with its quality compared to the other stages during the event.

The focus on sound quality dictated much of Sound System's design, including the use of front-facing drivers rather than typical horn-style delay speakers. This also means it will only be suitable for a capacity crowd of a few thousand people. "There's a point at which what we're doing here, which is direct facing units, wouldn't scale any further," Haikin explained. "Moving air becomes critical; the amount of air you shove becomes the defining aspect." To do so would also compromise the audio, so it was rejected in favour of smaller crowds.

Even so, it doesn't take a field full of people to appreciate the difference. Speaking onstage ahead of a day of music, WOMAD founder and ex-Genesis rocker Peter Gabriel explained it best: "The main aim here is to make better quality music so people know it is an option." Unless someone hears great sound, they won't instinctively know they are missing out with a pair of Apple EarPods, the speakers built into their TV or a tiny Bluetooth speaker dock. Even if it's to a few thousand people at a time, Bowers and Wilkins hopes Sound System will open people's eyes and encourage them to upgrade to something with better quality. If that kit happens to have a Bowers and Wilkins label on it, that's obviously a bonus.

B&W wouldn't tell us where Sound System was heading next, but the company hopes to bring it to several festivals next year. If you're hoping to hear it for yourself, the official Bowers and Wilkins blog will have the latest information. 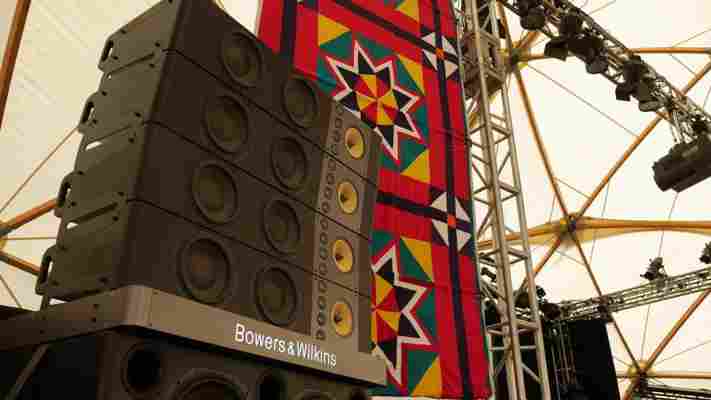