When Baccarat employees arrived at Milan’s Fine Arts Academy of Brera a little over a month ago to plan their shimmering installation for the city’s annual furniture fair, Salone del Mobile, they quickly came face-to-face with reality: There was no way to hang a chandelier from the ceiling of the 19th-century public arts school. To find a solution to the problem, they would have to think out of the box—and that’s exactly what they did. Since Tuesday, four gigantic wood boxes inspired by the original packaging of the brand’s magnificent chandeliers have filled the space, showcasing the latest crystal creations from the 250-year-old French company.

Priced at $1.1 million, Ostro’s Blue Topaz chandelier for Baccarat is made of 700 topaz gemstones and thousands of crystal beads. 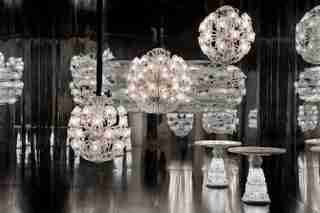 Named Le Roi Soleil, Dutch designer Marcel Wanders pays tribute to Louis XIV with a topsy turvy chandelier design that distorts the arms, tassels, and lampshades of the iconic Zenith chandelier. Wanders also created a table for Baccarat by flipping an enlarged iteration of his New Antique vase—a piece he designed in 2014—on its head, and topping it with a slab of marble. 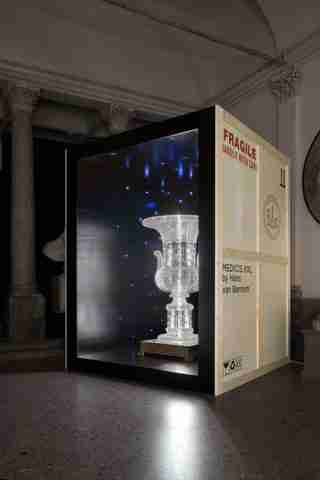 Dutch artist Hans van Bentem reenvisioned the Medicis vase created by Baccarat in 1909, enlarging it to 8.2 feet tall and covering it with 13,000 crystal pieces—a serious showstopper even before it’s out of the box.