Autism Informed the Entire Design of This Revolutionary Boarding School

Renee Marcus, an architect and the studio director of H2M Architects + Engineers, has worked on a number of school and college projects, but when she was tapped to design Shrub Oak International School, a boarding school for autistic teenagers outside of New York City, she discovered that she’d need to evaluate everything from windows to wall colors through a different lens.

“Even the lighting has to be considered carefully: Some of the ballasts have this high-pitched hum, and the children might be so bothered by that frequency that they can’t work,” says Marcus, who spent the past two and a half years overseeing the renovation of a 400,000-square-foot former seminary in Westchester County that sits on 127 acres.

When it opens to students for the first time this coming fall, Shrub Oak will join a growing number of residential institutions designed for autistic children and teenagers (the school will accept students up to age 22). Today, it’s estimated that 1 in 68 children has an autism spectrum disorder. While a number are high-functioning and do well in general-education classrooms, others require more specialized environments and curricula. 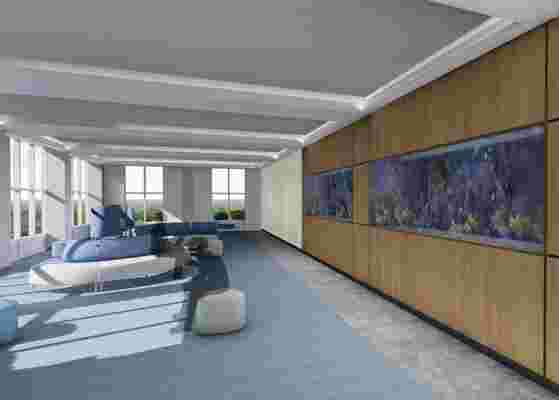 In the lobby are fish tanks, soft carpeting, and curved seating to enhance a sense of togetherness and enclosure.

As Dr. Gil Tippy, the codirector and head of clinical services at Shrub Oak explained, autistic children are often highly intelligent, but many suffer from sensory processing difficulties, which can lead to stress, anxiety, and confusion. Sensory difficulties range from fragmented and distorted vision—rendering bright colors and patterns disorienting—to an inability to filter out background noises, such that the hum of a heater makes it impossible to concentrate.

“Many of them can’t take the sensory pieces they’re receiving and make sense of them,” says Tippy. “One of the things that really marks the ability to do good things with these kids is to have a lot of space, uncluttered space. We want to give them time and space to process.”

In this, having a 127-acre campus is key. Shrub Oak will also include an equestrian center, an apiary, vegetable gardens, hiking trails, and an indoor pool for therapeutic use.

The challenge in designing spaces for people on the autism spectrum is that no two are alike, says Kristi Gaines, an associate professor in the Department of Design at Texas Tech and the lead author of Designing for Autism Spectrum Disorders . Even the same individual can have hypo- and hypersensitivities—for example, fixating on small noises made by mechanical systems while blocking out loud ones like a person calling their name. 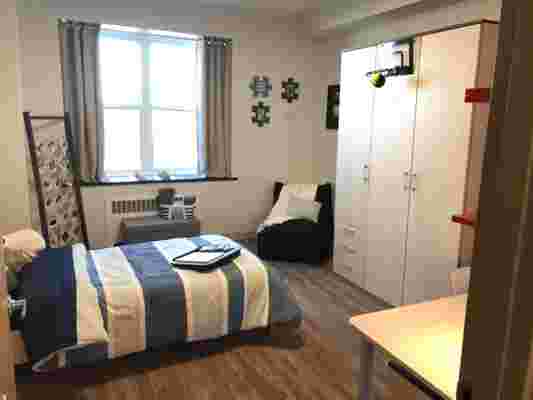 In student bedrooms like this one, color contrast between ceiling and walls is emphasized and flickering fluorescents are best avoided.

But, she says, a few basic principles are broadly applicable: Color contrasts between walls and floors, for example, help those with spatial disorientation; color-coding doors (blue for bathrooms, for instance) is similarly helpful; and harsh, direct sunlight and flickering fluorescents are best avoided.

Working with the school’s clinical staff, Marcus took a number of steps to accommodate the sensitivities of the incoming student body. Among the major goals was to mitigate the institutional feel of the complex; Marcus did this by putting a porte cochere in front of the building to bring down its scale and by replacing some of the brick masonry with glass curtain walls.

“We wanted to make it look and feel like a home, and that was really the challenge because it’s a giant brick building,” she says. 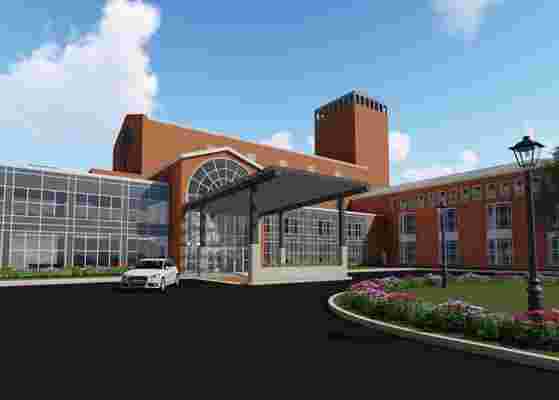 A porte cochere in front of the building brings down its scale, and brick masonry was replaced with glass curtain walls in places.

To that end, her firm also added millwork in the lobby, fish tanks, soft carpeting, and seating. In the student lounge, serpentine sofas with high backs will allow students to experience a sense of togetherness and enclosure. “You’re not too isolated, but you’re isolated enough that you feel safe,” says Marcus.

“In the primary schools and elementary schools we do, they love the bright colors,” says Marcus. “But here, we wanted it to be calming but not too boring: muted earth tones, taupes and grays, soft blues.”

To muffle footsteps in the hall, they installed moppable Flotex carpeting with a “felty” feel; a central courtyard with a quiet policy will absorb additional noise from the hallways and classrooms.

Throughout the school, colors and textures were also given careful consideration: nothing too bright or too shiny, too smooth or too rough.

“As the building was older, there were challenges to adapting it, but I think they dealt with it beautifully,” says Tippy.

While there are a number of conflicting theories and opinions about how best to design for those on the autism spectrum, Gaines pointed out that good autism-friendly design adheres to many of the same principles as good design in general: that design elements should have meaning, that an overly colorless and bland space is just as bad as an overstimulating one, and that it’s always helpful to consider how spaces make people feel.

In turn, some of elements used in classes with autistic students have started to migrate to the mainstream—for example, nooks partitioned off from the main classroom where an overwhelmed student can read alone on a beanbag.

“They see it as a benefit to everyone in the classroom,” Gaines says.