On a sultry summer evening two years ago, with the paint in his rooms barely dry, London decorator Veere Grenney bravely threw open the doors of his Tangier villa for a charity performance of Terence Rattigan’s play After the Dance, directed by Rob Ashford. The script called for a Mayfair drawing room, 1938, and Grenney’s supremely soigné living room, swathed in a rose-patterned chintz and crowded with ballroom chairs for the occasion, fit the bill to cut-crystal perfection. 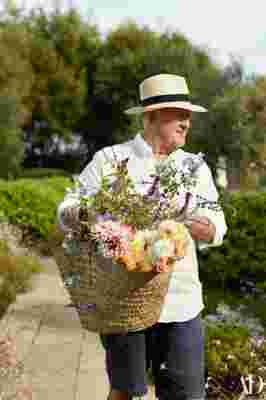 Grenney in the garden.

At one end of the space, two large Jansen mirrors, circled with coral-like branches, reflect a convivial roomscape of commodious armchairs and plump sofas beneath a stepped Soanian ceiling. At the other, a sunroom clad in treillage opens to breathtaking views across the Strait of Gibraltar, the roiling Mediterranean and the Atlantic, and Cape Trafalgar on the southern tip of Spain, less than 30 miles away.

Writers, artists, and assorted creative types have been drawn to this wind-blown spot ever since the ringleted Catherine of Braganza brought Tangier as part of her dowry when she married England’s Charles II. Samuel Pepys wrote in his diary under a fig tree in the casbah square. Beat poet Jack Kerouac marveled at “this dream of white robed Africa on the blue afternoon Sea” when he arrived by ferry, adding, “Wow, who dreamed it?” For Truman Capote it was “a timeless place” where “the days slide by less noticed than foam in a waterfall.”

Fueled by those literary echoes, a shaggy-haired, starry-eyed Grenney left his native Auckland in the early 1970s and arrived in Morocco at the age of 23. “I had this magic idea of all the people that lived here,” the AD100 star recalls. Reality did not disappoint. Here he soon met Mickey Raymond, a Colefax and Fowler Assoc. alum who, like many British aesthetes, had created a charming Tangerine home of his own. Raymond soon invited Grenney to dine at Villa Léon l’Africain, where the former Sotheby’s expert Richard Timewell lived in elegant retirement—only for Grenney, dressed in dungarees, to find a gathering of suave older bachelors. 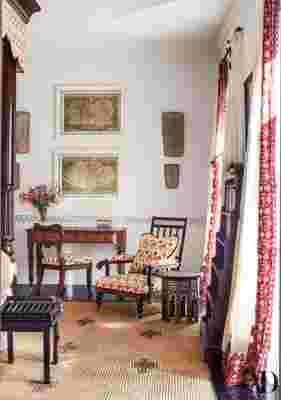 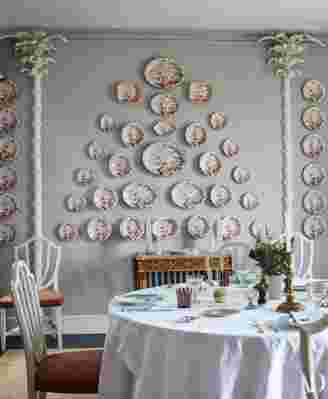 “It was the manifestation of everything one had ever dreamed of growing up in suburban New Zealand, all in one spot,” the decorator recalls. “A beautiful house full of wonderful English furniture and pictures and this cacophony of French, English, and Moroccan campery and God-knows-what in a colonial style in a colonial country.”

In the years to follow, Grenney put his imprimatur on a series of homes for himself, from the Temple, an exquisite Palladian hunting lodge in Suffolk, to a chic aerie in Rio de Janeiro. (His delectable aesthetic hits bookstores in September with A Point of View, published by Rizzoli.) Still, Tangier kept calling.

“As the world has become so homogenized, Tangier still has a flavor,” he says. Temporarily settled, he set out to look “at every house probably ever being sold,” he recalls. Finally Gazebo came into view. “That little house completely tugged every heartstring,” the interior decorator recalls, “though it’s the garden that I really wanted.”

The great decorators we admire didn’t stop with the house, they paid attention to food, hospitality, and the garden.

Gazebo had once belonged to the late Joe McPhillips, a molasses-voiced Alabamian who washed up in Tangier in the 1960s and ended up headmaster of the American School of Tangier, dubbed “the Andover of the Mediterranean.” There he proved adept at corralling legendary talents to the service of the institution. Paul Bowles composed the music for no fewer than nine of the school’s dramatic productions, among them The Bacchae with costumes by Yves Saint Laurent, and Salome with costumes by Claudio Bravo. Tangerine grande dame Marguerite McBey, widow of the Scottish artist James, installed McPhillips in a charming little house that her mother created in the 1930s. She also eventually left the place to him, saying, “Beautiful people should have beautiful things.”

Grenney has largely respected Gazebo’s modest one-bedroom footprint, so that from the street the gray-shuttered villa looks much as it always did. However, he amplified the drawing room, where Moroccan beauties painted in the 1930s by James McBey hang alongside vivacious Tangier seascapes by Sir John Lavery. He calmed a treacherous staircase and built a sumptuous adjoining structure with five guest bedrooms, where prettily painted 18th-century English furniture is arranged atop straw-and-leather rugs from Mauritania.

Decoratively speaking, Grenney says, Moroccan artisans “are the miracle here.” Many of the bed hangings and curtains were woven on looms in the fonduk. Plasterers reinterpreted the spindly palm trees of an iconic Syrie Maugham interior for the dining room Grenney calls the Great Wall of China because of its tiers of circa-1815 Royal Worcester plates. Metalworkers reproduced 1930s industrial windows for the new studio, and tilers from Fez installed the mosaics of the bathroom walls.

Alistair Erskine, the trompe l’oeil alchemist with whom Grenney has worked for a quarter of a century, moved in for three months to work on the library, evoking a Renzo Mongiardino project in panels of faux tilework. “All the gardeners are speechless,” Grenney says. “They cannot believe it’s not real!”

When the despotic sharqi winds blow, Grenney is protected by a courtyard with a loggia that he copied from a 1930s Clough Williams-Ellis example. On the kitchen terrace is a similarly protected Vogue Regency gazebo, created by architectural designer Cosimo Sesti, where meals are taken throughout the summer. “It’s like being on ship,” says Grenney, “completely and utterly the most sublime place to sit and eat and look right out to the Atlantic. It’s just fantastic.”