The circumstances under which the London-bred model Jacquetta Wheeler assumed shared custody and renovation duties of Dar Sinclair , in Tangier, Morocco, are far from run of the mill. Her family history with the home dates back almost a century, to her great-grandfather, the architect Jack Sinclair, who built it as a bungalow in 1926. It was passed down through generations, and Wheeler didn’t expect to gain part-ownership (with her younger sister, Charlotte) until much later. But the sudden death in late 2016 of her mother, photographer Tessa Codrington, accelerated the timeline. Complicating matters further, Codrington had begun a significant renovation days before she passed.

“Suddenly there were builders in Tangier who didn’t know what to do,” says Wheeler, “and Charlotte and I didn’t know what to do, so we just had to take it on. It was hard in the beginning, but it became the most incredible and wonderful project for the most sad reasons—two or three times I dreamt at night that I was going through all the fabric samples with my mom and we were choosing them together, and then I’d wake up.” 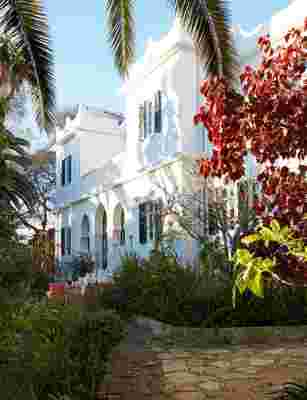 The balcony on the upper level of Dar Sinclair incorporates the types of Moroccan and African cutouts that were at the heart of the architect’s style, honed in Zanzibar in the early 20th century. “We went on a family trip to Zanzibar and Tanzania when I was about 15, and I remember my mom pointing out various buildings he designed that had similar shapes,” says Wheeler.

Sinclair was a prominent English builder in Tanzania and Zanzibar in the early 20th century, and his signature keyhole doorways and arched silhouettes are evident in this home, which underwent additions in 1949 and 1995 before the most recent one. “He was one of the first British people to spend any time in Tangier,” says Wheeler, adding her great-grandfather fell in love with the city and immediately bought a chunk of land where Dar Sinclair now sits. Wheeler’s mother inherited the home at 19 and spent several years living there in the early ’70s. “She loved being there more than anywhere else,” comments Wheeler.

Though her mom had indicated structurally what she planned—adding central heat and air, opening up the living room, and extending the kitchen—“none of us had any idea what she was planning decoratively,” says Wheeler. “In a way that was probably quite a good thing, because if we’d known and I hadn’t wanted to do it we would have felt quite guilty changing it.” Wheeler, who’s modeled for the likes of Gucci, YSL, Burberry, and Chanel over a two-decade career, spent much of the first half of 2017 in Tangier and London working on Dar Sinclair. 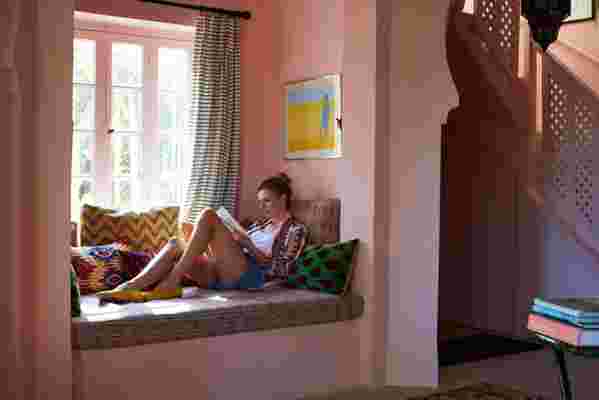 Some of the cushions on the daybed—where Wheeler reads—were made of fabrics found on London's Portobello Road. “Peter Hinwood was with me when I found the green with red hearts,” recalls Wheeler. Many others came from Majid, a local shop, “where you just want everything.”

Wheeler also leaned a bit on longtime friends of her mom’s—local furniture and antique shop owners and dealers, and international designers including Christopher Leach, Christopher Gibbs, and Peter Hinwood during the quick process that meant “there was no room to spend too long making decisions.” She also enlisted a childhood friend, the London-based interior designer Diana de la Rue, to help plan the palettes of each space and assist with the several-week installation. Designer Gavin Houghton helped immensely with paint colors. “He sort of directed us, pointed us in the right direction room by room.” The vibrant pink first level was his idea, and a painter named Mohammad mixed samples for them in real time, painting them on the wall and marking the chosen shade with an X .

Ramadan, during which the Muslim workers cannot eat or drink all day (and often don’t work), came right as things were wrapping up. “I’m so grateful to all of the men who helped through Ramadan and worked so hard,” says Wheeler, adding that the whole challenging experience ultimately made her feel tied to Tangier and its distinctive magic. “My French had to improve, and I felt like I really got underneath that layer of the city. I’ve only ever known it as a tourist on holiday. I had a really lovely time, but now I’m more part of it—it’s more part of me.” 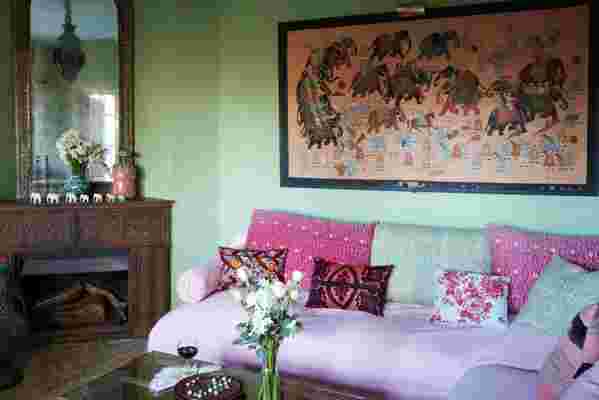